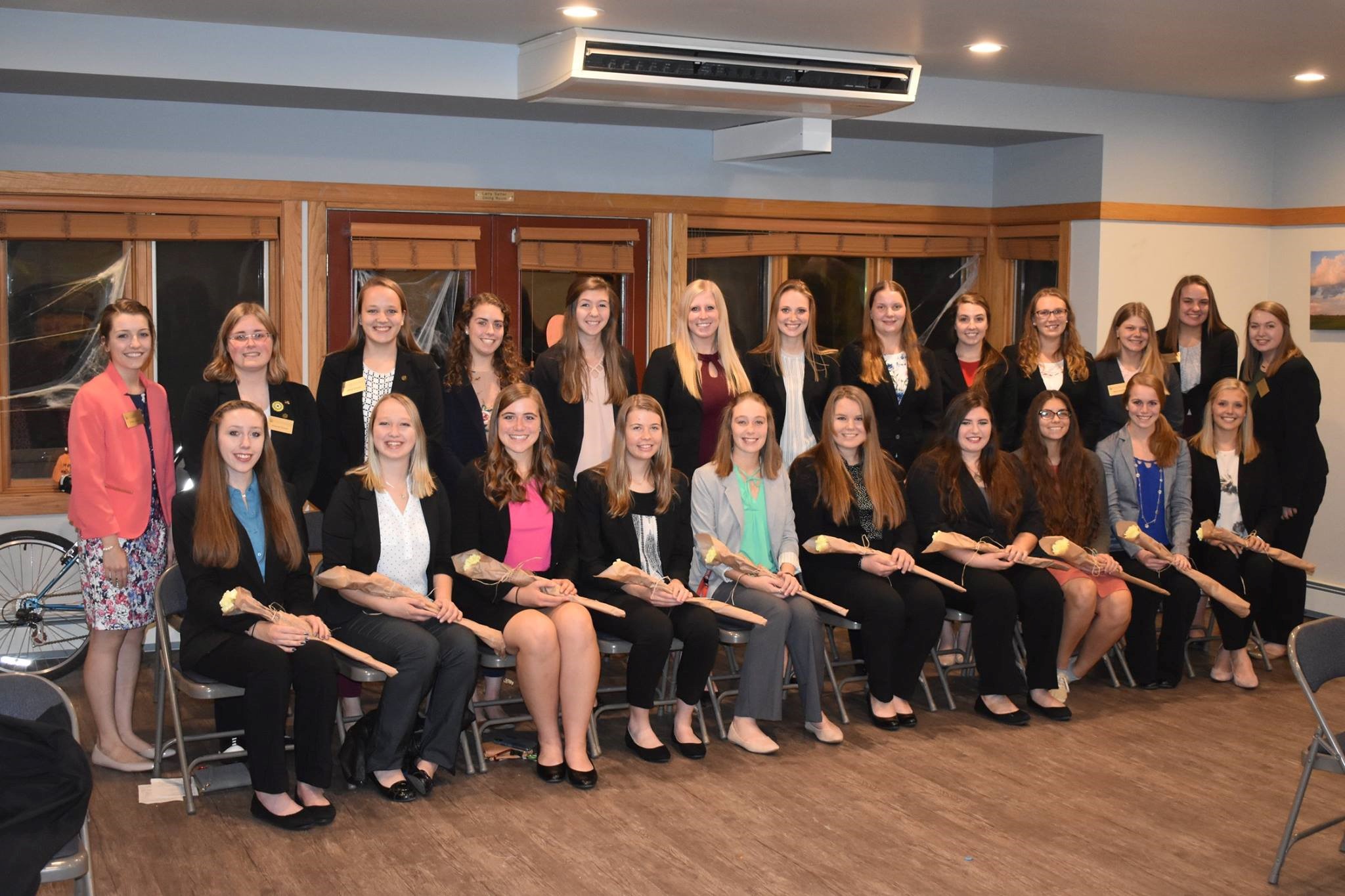 Each year, AWABC presents members with scholarships to support them in their academic endeavors. In the spring of 2022, 20 students were recognized and a total of $20,000 was given in support. Thank you to our donors and supporters!

The AWA Scholarship is made possible by the generous support of AWA Alumni and friends.

AWA House Scholarships are awarded to young women living in the AWA house and are made possible by the generous support of AWA Alumni and friends.

Demeter is a charitable organization made up of women interested in agriculture.

Dr. David P. Dickson, known around the world for his dairy cattle evaluation and coaching skills, made significant financial contributions to AWA and mentored many members. He was a professor and department chair in dairy science and a long-time coach of the UW Judging team and advisor to many dairy science students. He impacted the lives of countless students throughout his time at UW and was a big supporter of AWA.

He had a reputation for being positive, energetic, approachable, and fair. As one AWA alumna put it, “While Dr. Dave may not have been an official AWA advisor, he supported us throughout his career at UW-Madison.”

Delma Donald Woodburn, a 1921 economics graduate, who later went to UW-Madison’s Farm and Industry Short Course, was the wife of UW engineering Professor James Woodburn. Woodburn shared much interest in women’s success in agriculture and provided both encouragement and financial resources to AWA. She was born near Mt. Horeb and graduated from UW Madison in Economics in 1921. Her father served as Secretary of State in early 1900s and went on to become a UW CALS farm management expert. Delma returned to Madison after being married and ultimately earned a degree from UW Short Course in 1940. Through the years, she helped manage her family’s farm near Mt. Horeb and lived on Prospect St. for many years.

She started out many young farmers in their careers by farming on shares with them. Many are successful dairy operators today. She had a keen interest in history, agriculture and land conservation. She provided encouragement to AWA when our idea of a house was just a dream. She also contributed funds to help it become a reality. Delma loved attending our annual meeting and other events when she could to see and meet younger women in their quest for success in agriculture. She passed away in 2001 at 102 years old.

Cynthia Benevenga was active in the Madison community and a dedicated member of the Daughters of Demeter (now Demeter), The University League and the League of Women Voters Dane County, serving as president of both Demeter and LWF. Cynthia was a believer in women's equality and scholarship. She personally came for many years to AWA Day to hand out scholarships to our members on behalf of Demeter. Cynthia’s husband Norlin was a CALS professor, and she worked in administration for the UW system for 15 years. During this time she achieved her dream of a college degree, getting her BA in Economics in 1980.

Cynthia passed away in April 2013. In the spirit of her dedication to women’s leadership and community service, her family decided to designated memorials to AWA to honor her memory. Cynthia was a great supporter of AWA and admired the passion she saw in our members.

Dr. Larry Satter, a world-renowned dairy scientist, served as AWA’s long-time campus adviser. Dr. Satter was in the Dairy Science department then at the USDA Forage Research Center. He passed away in 2006 from cancer at 69 years old. He was one of the world’s foremost dairy nutritional scientists. From AWA's early years, Dr. Satter took a keen interest in AWA and our members. He helped AWA with the “small things” like securing items for Farmer’s Olympics. And, he helped guide AWA in our quest for a living unit, first making contact with Rural Insurance, who then ultimately loaned us funds to build our house.

At his retirement reception, he listed AWA’s success as one of his most notable accomplishments. He saw the need for AWA, he saw students’ desire for it and saw the potential for our group – on campus in the agriculture arena at-large.

A comment about Larry from a fellow AWA advisor sums it up well: “As an off-campus advisor to AWA for a number of years, I had many opportunities to observe and experience Dr. Satter’s dedication to and total support of AWA. He was always available to provide guidance, advice, special counsel and, as needed, the necessary miracle to get the job done.  His heart was in everything he did for AWA and he was very proud of all you have accomplished and will continue to accomplish.”

First awarded in 2018, this scholarship will be awarded each year, rotating every other between AWA and AGR. It is made possible by AWA/AGR alumni Krista Knigge and Corey Geiger.

The Nicole Bangart Memorial Scholarship is awarded to an individual to be used at an agricultural education or professional development event. Nicole had a true passion for agriculture and was an active member of AWA. She graduated in 2014 with a degree in Animal Science. Nicole’s friendship was cherished by so many, and she is greatly missed by her AWA sisters.

The Kelsey Jo Olson Memorial Scholarship is awarded to an individual who is involved in both AWA and National Agri-Marketing Association (NAMA), like Kelsey. The scholarship is to be used to support this individual's travel and expenses at the NAMA Marketing Competition. The recipient is selected by the leadership committee with representation from both organizations.

Kelsey was a bright, engaged and talented individual and member of both AWA and NAMA. She graduated in May 2015 with a degree in life sciences communication and had a great passion for agriculture and an abundance of compassion for people. She passed away in September 2015. Kelsey's brilliant insights, positive attitude, infectious laughter and beautiful smile is missed by her AWA sisters and NAMA teammates.

Students: For information on how to apply for AWA Student Scholarships, please contact the AWA Student Vice President.